Originality is a fundamental tenet of good design. Designers are not expected to reinvent the wheel with every new commission, but copy/pasting existing work circumvents the design process, prioritising visuals over the functional inputs that should inform it — in other words, it is not designing at all. And it is unethical.

In our first Polemic, What is design anyway? we highlighted the importance of “self-reflection”. Designers who probe and are both critical of themselves and aware of their moments of good judgement can develop a solid professional ethos where they can articulate and defend their work. In this new Polemic series, ’Copymania’, we look at the practice of copying work, from the perspective of the professional ethics of the designer (this article), the ethics of the consumer and the rights and legal protections offered to designers who have been exploited.

Consumer culture places extreme pressure on designers to be constantly churning out new ideas. Nowhere is this relentless cycle more apparent than in the fashion industry, where the calendar of new seasons and collections reaches a dizzying pace. Beyond the obvious question of the sustainability related to all the needless ‘stuff’ being produced, consumer culture presents a professional challenge to designers trying to keep up levels of 'inspiration' to meet demands to output new work. Resulting in a growing copycat culture, where it has become ubiquitous to simply scan the cultural landscape and rehash existing ideas, side-stepping design methodologies completely. 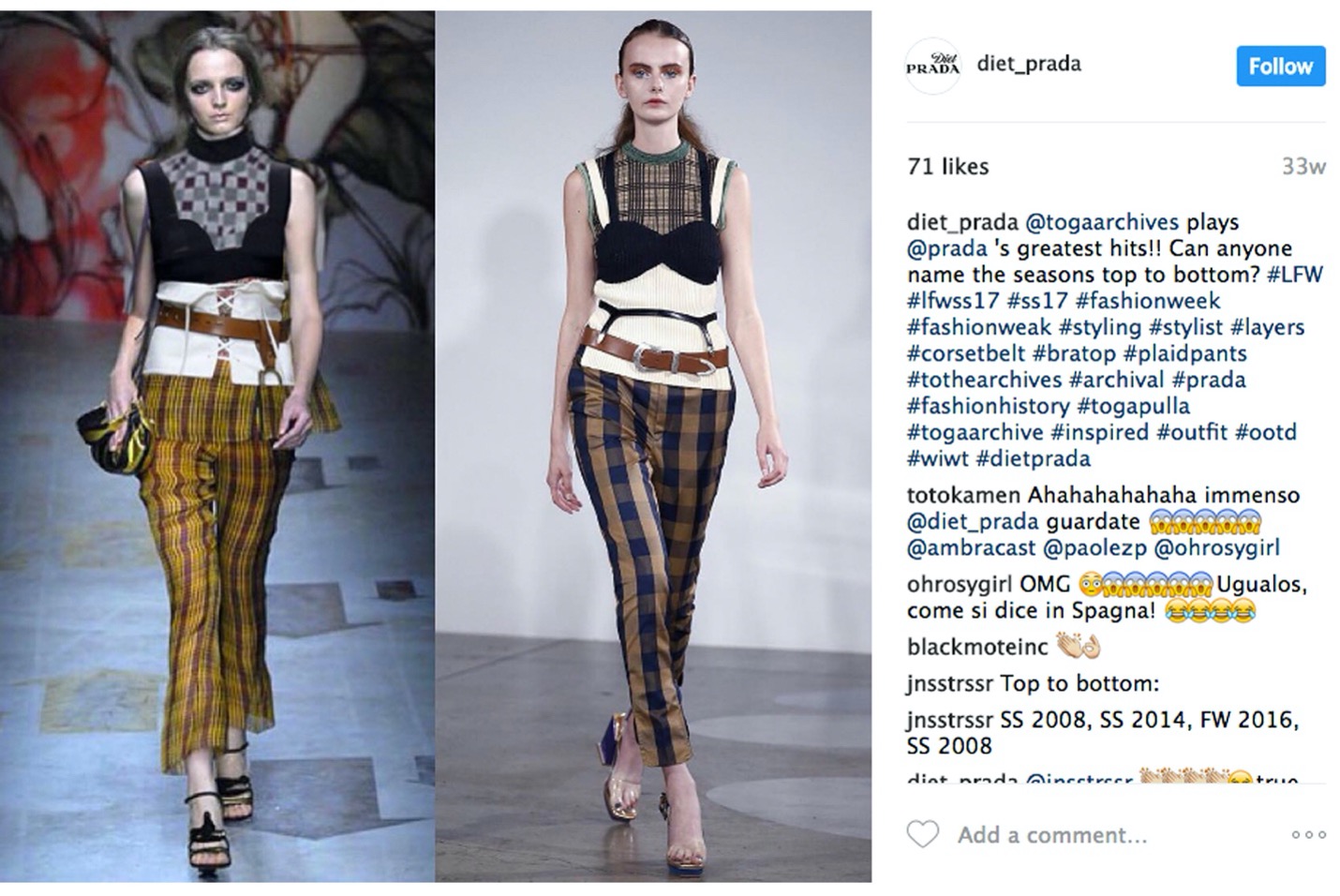 Screenshot from @diet_prada: an Instagram forum that calls-out lack of originality

Consequently, a call-out culture has also emerged showing that consumers and those in the industry have noticed what’s going on. Instagram accounts like Diet Prada (image above) openly discuss the lack of originality of renowned fashion houses and the lightning-fast knock-offs produced by fast fashion companies, sometimes within hours. Thus, further giving rise to pushbacks from some designers who defend the rehash as a legitimate form of industry meta-analysis.

THE PROBLEM WITH THE '3% RULE'

The “3% rule” claims that if you take an existing design and alter it up to 3% it is no longer considered to be stealing or copying a design. Analysing this a little more closely, one has to wonder what exactly constitutes "3% of a design"? Most of the time, what is referenced is the visual aspect of the design. However, the entirety of the design is not only based on what you see superficially. By copy/pasting the visual aesthetics of existing designs, designers circumvent the design process entirely. Instead of using established methodology to formulate potential solutions to a problem, instead of reflecting material or manufacturing constraints, they are settling for a copy of the visual aesthetics proposed by previous designs. This act might have some merit within the consumer culture that breeds it, but it has very little value from the standpoint of the quality of the design-ing.

IS EVERYTHING COPYING AT SOME LEVEL?

Expanding a source is not faking it or, plagiarism, maintains writer Cameron Chapman. She suggests that homages to other designers are often in the spirit of innovating on design language and vocabulary, and form part of a larger conversation about broadening the design discourse. There are no truly original ideas; everything being produced today comes after something else. Designing after existing designs is building on steadfast, hard-won design principles, long after the original source is lost. Chapman cites web grids having become a necessary design platform from which good designers build and experiment: “Without copying and building on the work of other designers, there would be no websites. Design as both a practice and a functional tool would never have come to exist.” (Chapman). This principle holds in other design industries. Taking an innovation — like say a new material, a type of clasp, a technical advancement, a useability feature — and building on that acquired knowledge to push forward to newer and better designs enriches the overall quality of the built environment. 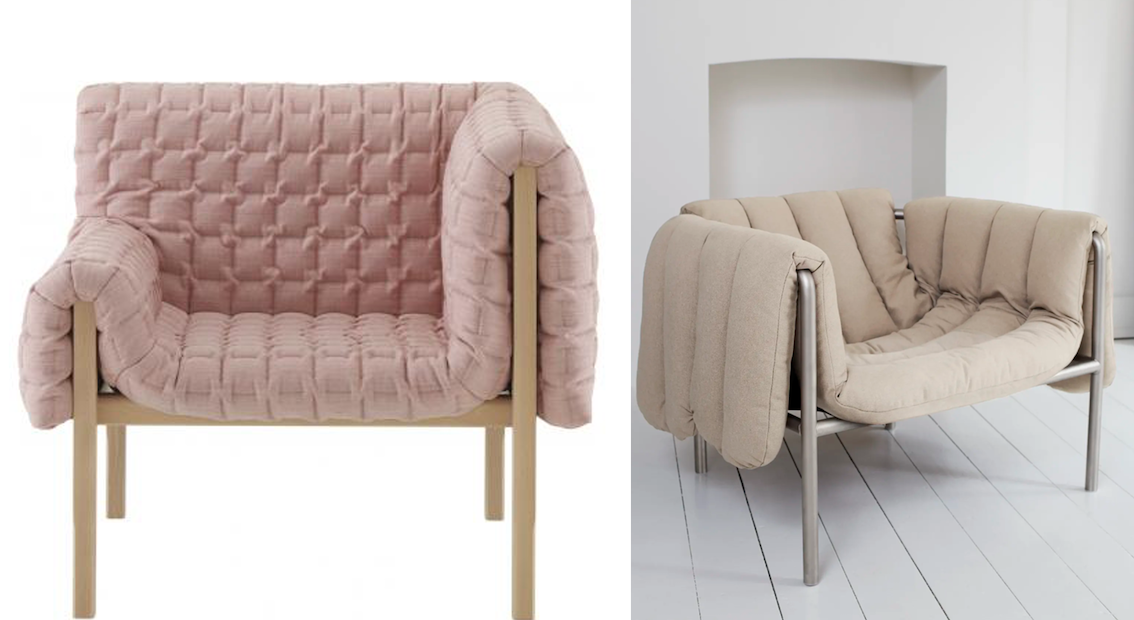 As an extension to the previous ideas presented, just because designs look alike does not mean that they are copies or even that one is inspired by the other. As mentioned earlier, there is so much more to a design than the final form it takes. Sometimes a series of decisions within a structured design process will lead to choices of materials, structures, manufacturing processes or ergonomics that will superficially appear similar. And that is totally acceptable. When the final results meet the demands of the brief, providing a solution that is unique from the standpoint of technology, materials, useability or other functional factors but ends up being aesthetically similar to something existent, this does not take away from the overall quality of the solution as a whole.

It is extremely reductive to judge designs based solely on their visual appearance. Though form is an essential part of any design toolkit, it is always — or should always be — to some degree a by-product of the function. In this way, it can be almost incidental to the overall design. These superficial similarities seen in the context of Instagram, taking away in-depth knowledge of the product, can be very easy to judge as similar. 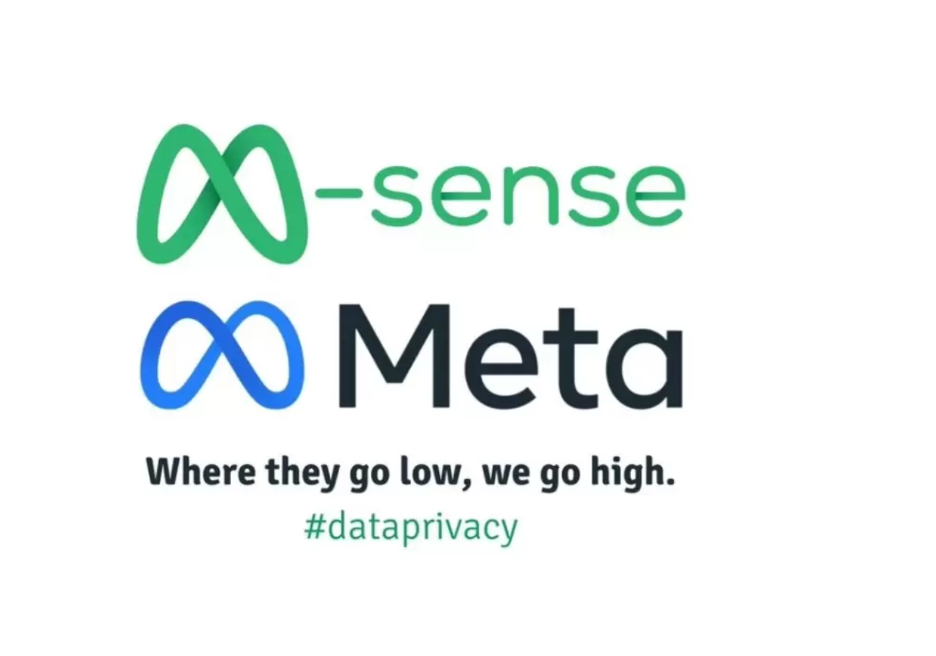 The M-sense and Meta logos compared

There is a particular category of look-alike design that deserves a dishonourable mention. Some design is just not original. When the design process is followed only superficially or not at all, sometimes designers will come up with the same concept, independent of each other. This is not copying. It is just banal. We call this 'facile' design. An example of this would be the newly released logo of Facebook's mother company Meta. The infinity symbol has been claimed by many companies, most notably a German migraine app and the Chinese social media platform, Wechat.

USING THE WORK OF OTHERS IS UNETHICAL

Without going into detail it bears mentioning that professional designers should know that using the work of others without adequately receiving permission and paying for the rights to what is used is considered unethical by the International Council of Design, its Member organisations and most recognised legitimate design institutions.

RADICAL REFUSAL: IT IS UP TO PROFESSIONAL DESIGNERS TO SET THE STANDARD

There is immense pressure on designers to produce faster and more cheaply. Even big-name designers with an important following and real clout fall prey to this. Some even profit from it. This practice is damaging to the design profession and the overall quality of design. The bypassing of the professional design process in favour of a quick superficial rehash creates poor design results. It is our view that designers need to hold themselves to a higher standard and refuse to copy. There is a need for us as a profession to call out copying, or at very least to have a critical discussion about it. The practice impoverishes culture and degrades the profession. To engage in a radical system shift, designers need to refuse to accept to do bad work.

An excerpt from Gucci designer Alessandro Michele's personal Instagram, 'notes from the silence' a personal reflection in response to the pressures of the fashion cycle

Welcome to the 'Polemics' section of our website. This is a place where we want to explore discourse and thought on the contemporary practice of design. We aim to take a critical view of the profession and the controversial issues that surround its practice. Much like the famed 'Design Crit' an examined practice is one that becomes more honed, better formulated and more meaningful.

APPROPRIATION: the use of pre-existing works (such as existing designs, illustrations, or photography) in the creation or composition of a design or creative work. If the appropriated works are significantly altered in the creation of a new work, such as a collage, the use is often deemed to be a fair use. However, appropriation can raise significant copyright and ethical concerns, particularly if the existing works are used without the original creator’s knowledge or permission, or if the appropriated works are used with little alteration.

COPYRIGHT: the exclusive legal right granted to the creator or owner of intellectual property to print, publish, reproduce, distribute, or perform that work, or to authorise others to do so. A work is considered copyrighted upon creation. However, it must be fixed in tangible form (including digital files), and it must meet minimal standards of originality.

FAIR USE: Fair use (also known as ‘Fair Dealing’) is a legal concept that allows the use of copyrighted material for certain purposes without obtaining permission and without paying a fee or royalty. Purposes permitting the application of fair use generally include review, news reporting, teaching, or scholarly research.

INNOVATION: this term is often erroneously used as a substitute for ‘new’ or ‘different,’ but innovation is much more impactful than mere novelty. Real innovation creates disruptive change, and this can only be measured over time based on sustained impact.

PIRACY: the exploitation of works protected under intellectual property rights, without the permission of the rightsholder. Piracy can include the theft of intangible works, such as trade secrets, as well as the unauthorised reproduction of created works, such as music recordings, books, digital typefaces, and films. Such pirated works are often sold for substantially reduced prices on the grey market, diverting income away from the legitimate rightsholders.

PLAGIARISM: the act of taking someone else’s work or ideas and passing them off as one’s own.

Share:
Previous in the 'metaverse' design is shallow and absurd
Next what is design anyway?!
View