It is with regret but also happiness that the Council announces that Alexey Lazarev, ICoD Visual Communications Officer, is moving on to new creative horizons. We thank Alexey for his immense talent as a designer, and for his creative, collaborative work as our colleague. In this interview we share a little more about Alexey's work at ICoD and his future artistic endeavours.

"Alexey leaves behind a solid graphic template for the Council’s visual communications. He has been instrumental in creating a cohesive visual identity for the Council over the past decade that is exemplified in the visual codes of the new website as well as across platforms on social media, in printed documents and beyond.' 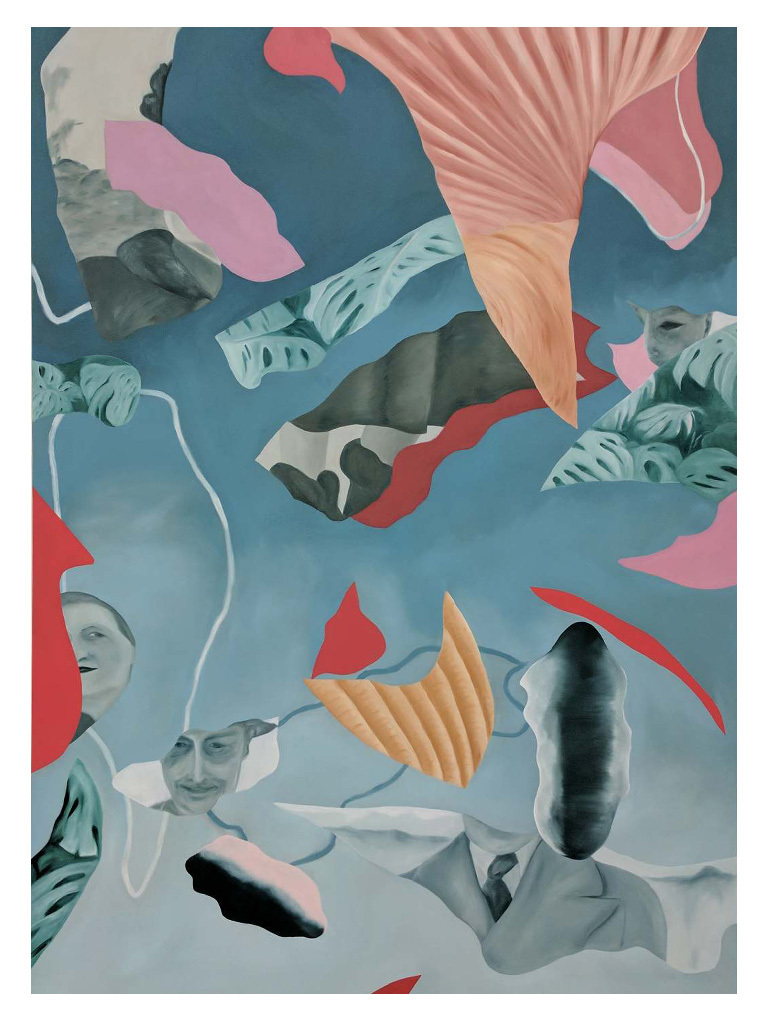 
Alexey Lazarev is a multidisciplinary visual artist. Born in Saint Petersburg (Russia), Alexey has lived and worked in Montreal since 2012. His artistic journey began at the British School of Art and Design (BHSAD) in Moscow and continued at Concordia University, where Alexey discovered a passion for print media and ceramics in addition to his interest in drawing. He works in the expanded field of print media and his practice includes installation. Alexey’s role at the Council was primarily to develop and implement the Council's unique visual language across multiple programmes, initiatives and communications channels. Prior to his departure, in March 2022, ICoD carried out the following interview with now former Visual Communications Designer Alexey Lazarev.


What brought you to ICoD? In what ways was your work at the Council a good learning experience for your art practice and development as an artist?

I joined ICoD in 2015. After working in online communications at a sister organisation Icsid (now WDO) for several years, I was offered a part-time position as a visual communications officer at the Council where I worked for seven years. I am eternally grateful for the flexibility in schedule that allowed me to pursue and to develop my artistic practice at the same time. My responsibilities at ICoD extended past simple graphic design tasks. Working closely with the managing director Ana Masut and the communications officer Alisha Piercy (also an artist!), we revamped the visual guidelines of the organisation that has been at the forefront of professional design for nearly six decades. A big part of the exercise was to unify the visual style across many different platforms that were multiplying before our eyes: print, web, social media...and more. 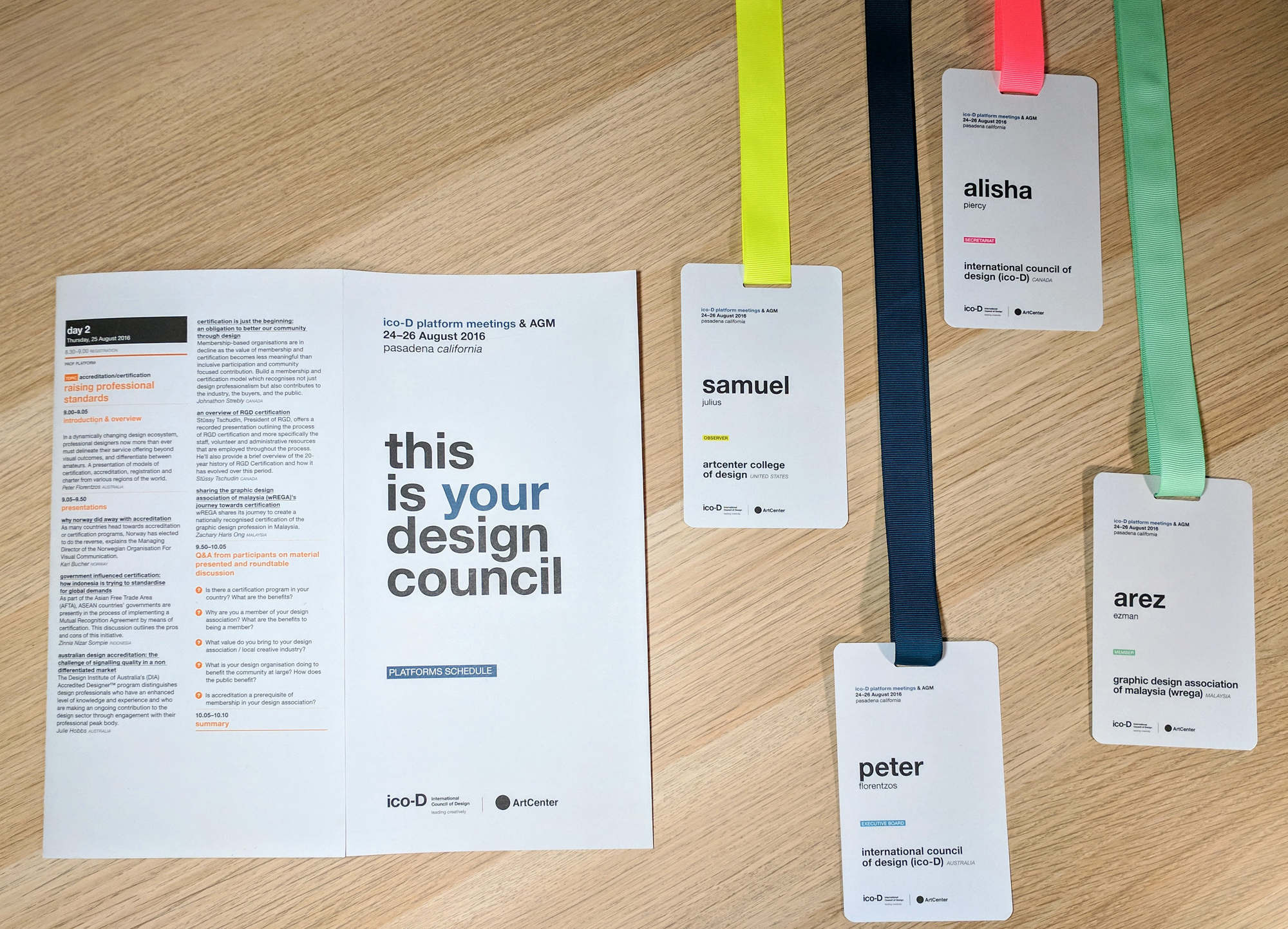 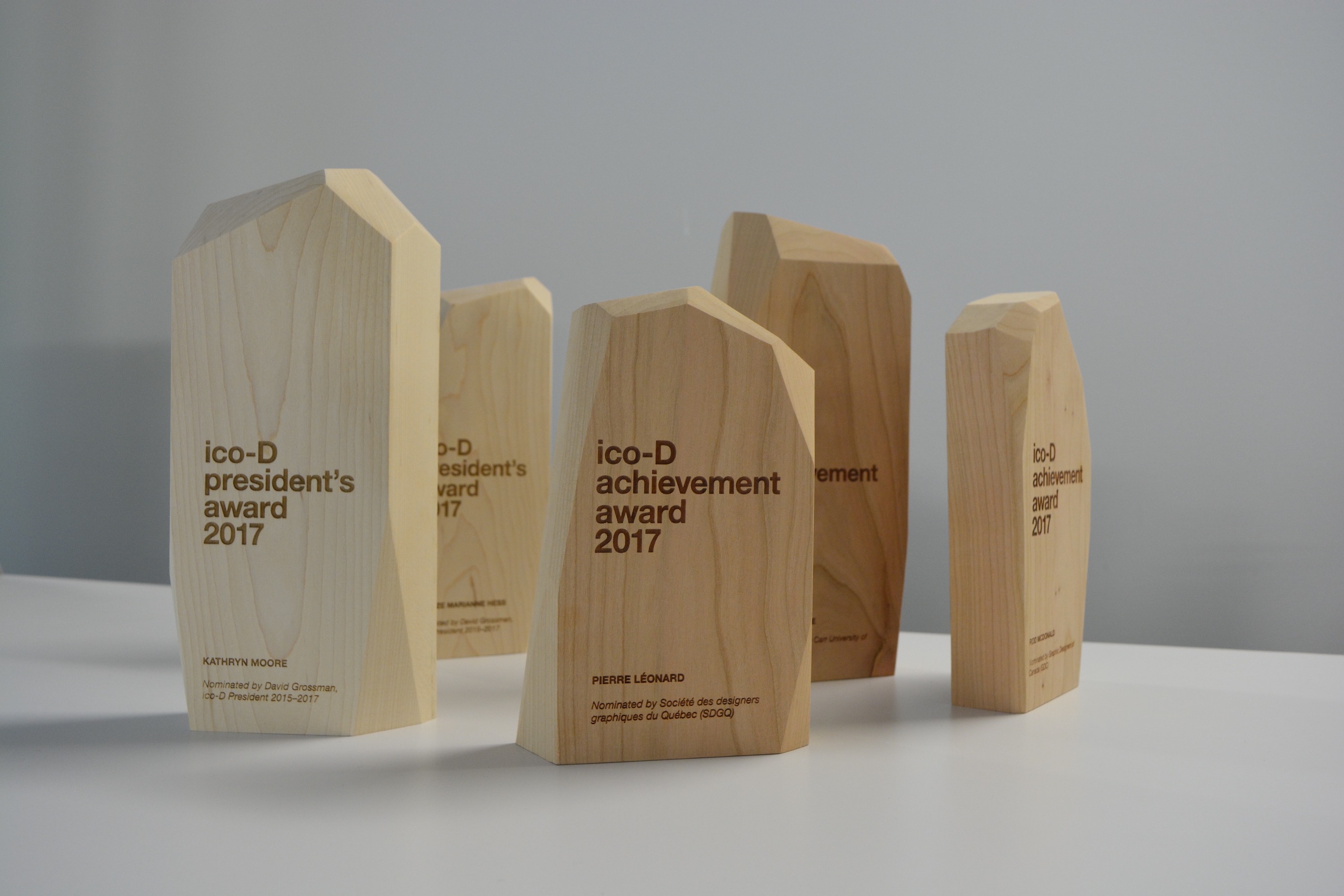 It was a bit nerve wracking to start tweaking the design language that stems from the guidelines created by the infamous Pentagram in the 90s and enriched by so many talented designers who volunteered their skills and time before my arrival. The challenge was to create a style that would be simple, scalable, minimalistic yet dynamic and easily recognisable whether seen on the internet or at the international meeting. Working part-time also meant the need to be well organised and work fast. This challenge pushed me to find many shortcuts to working with data and creating systems that would save time. Ultimately, completing these challenges had a positive impact on my organisational skills as an artist as well: you have to be very efficient to stay on top of things.

Tell me a bit about yourself Alexey, and how you work as an artist.

Officially, my artist career started in the summer of 2017 with a duo show at the Patrick Mikhail gallery in Montreal. At that time I was still a student at Concordia University from which I graduated in 2019. I showed two large-scale oil paintings that explored the tension between personal identity and collective memory. I created the compositions using a collage method manipulating some photographs found at a St Michel flea market in Montréal and some from my personal archives. Looking back, I realise that my background in design had a strong influence on my approach to art making. I've been told that my earlier artwork had a 'designed' feel to it. Since then, my method has changed quite a bit—I think that now I work more intuitively to allow more space for accidents and experiments. One thing stays pretty constant though: my art is linked to and grounded in drawing. In the last several years I've been working mostly with traditional print media such as woodcut, etching, dry point, aquatint, serigraphy and, most recently, lithography. In the meantime, my practice has been steadily moving in the direction of installation and is becoming more three-dimensional. Currently, I'm working towards my first solo show scheduled to open in November 2022. 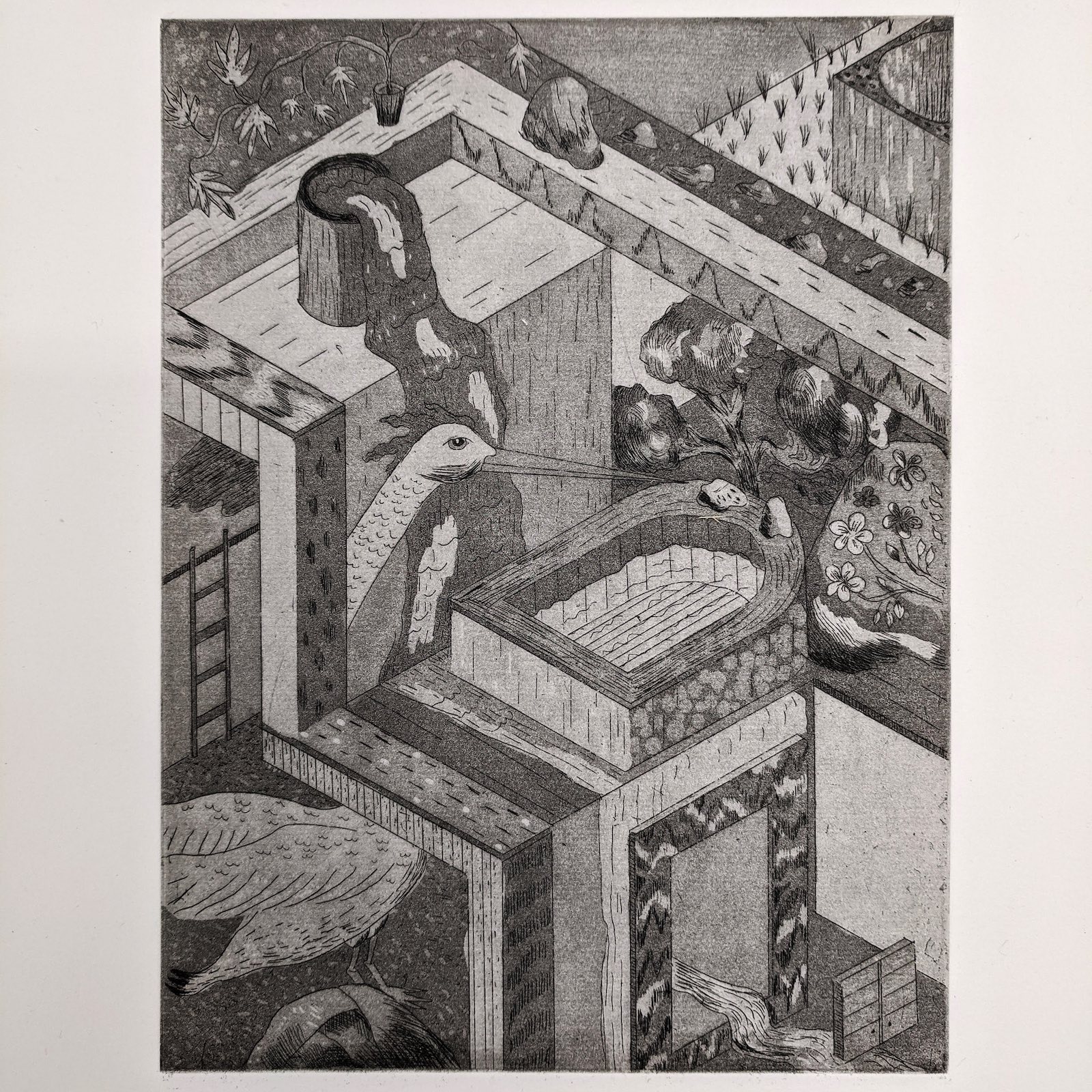 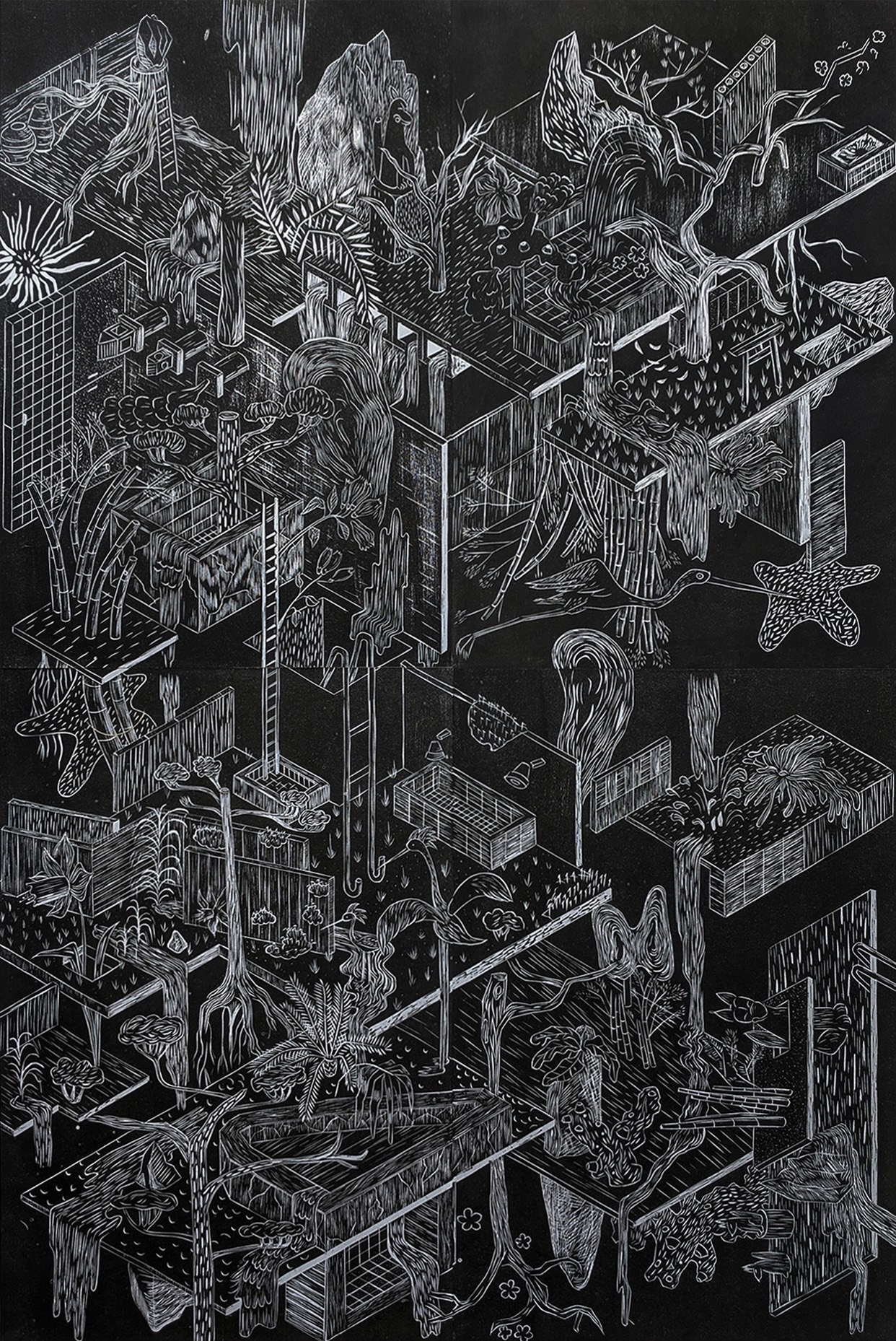 
In your mind, how do design and art intersect best in today's world?

I think they are very much interconnected: at times it's even hard to say which is which. To me, the main distinction is that design generally offers solutions and answers questions, and art is more ambiguous and asks questions without necessarily offering a solution. They constantly borrow from each other: designers may be borrowing from artists in terms of form and aesthetics, and artists may be employing design methods, and using the software. Ultimately, both are destined to be experienced by the audience—in different capacities—and both are inseparable from society as well as from politics, economy and culture. I think they make each other better. 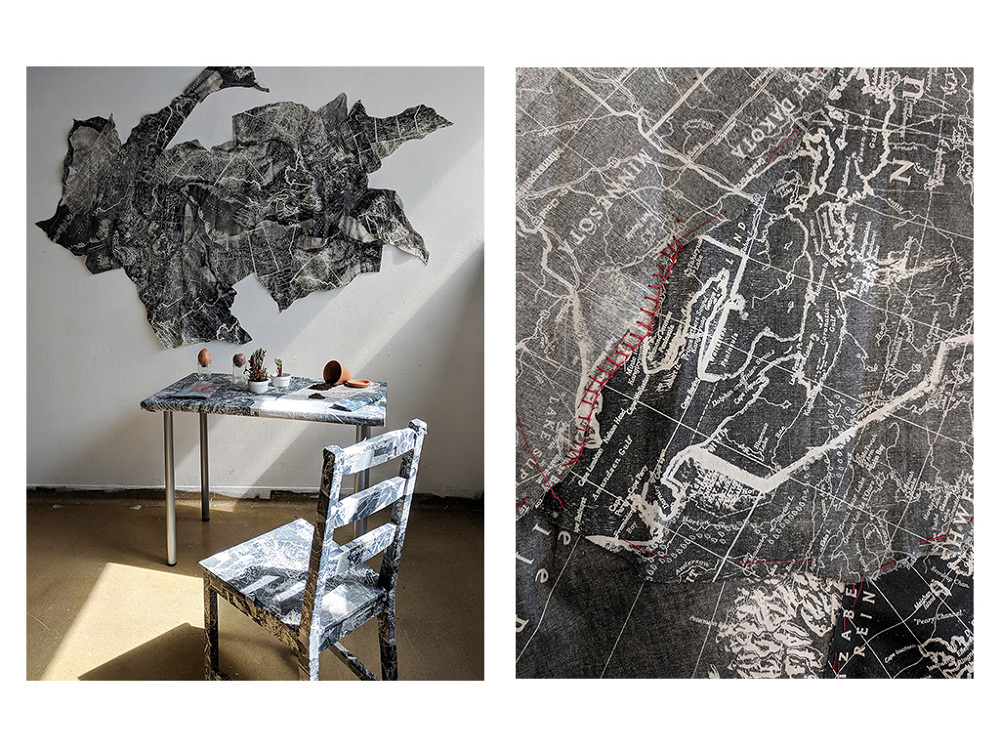 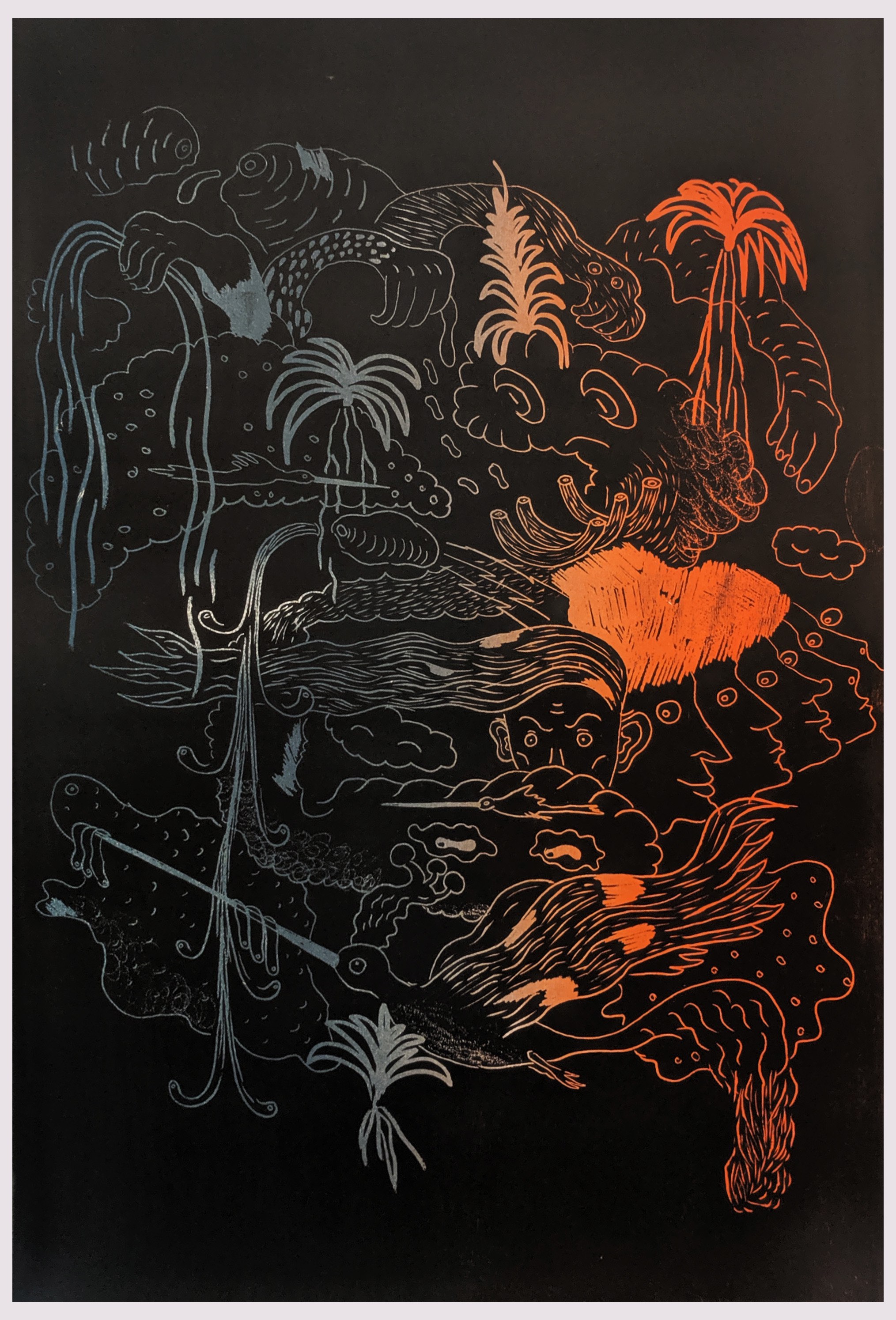 It May Be Windy Today, woodcut, Alexey Lazarev, 2019

Tell us about your latest projects and why now it's important to commit more time to your art career.

Like many other artists, I'm working on several projects at the same time. The main project for this year is 'Invisible Shelter' and it will tell stories of nine queer migrants who recently moved to Montreal. In this project I will combine interviews, participants' portraits and images of rare plants from the Montreal Botanical Garden to create an immersive installation of prints accompanied with soundbites from the interviews. In 2021 I got a grant from the Canada Council to produce and exhibit the work. The installation will be showcased at the LGBTQ+ Community Centre in Montreal in November 2022. Another project I'm currently developing will be loosely based on my long sejour in Itoshima (Japan) in 2020 when the pandemic hit and I couldn't leave the country. The project is entitled 'Low Tide' and will deal with documentation, archival and systematisation of the novelties that we encounter (experienced as tangible things such as objects, architecture, or as ephemeral things like emotions or feelings). In this project, I will be returning to working with clay from which I've been taking a break. More precisely, I will be using the woodblocks to press against the slabs of clay that will later be fired and glazed. The geography of the project will expand as I intend to include several more places that are significant to me such as Thingvellir in Iceland, Gaspé peninsula in Québec and the Karelian Isthmus in the North-West of Russia.


From all of us at ICoD: we wish Alexey all the best for his future plans and—we miss him already! We hope our collaborations will continue in years to come.

Alexey Lazarev is a multidisciplinary visual artist. Born in Saint Petersburg (Russia), Alexey has lived and worked in Montreal since 2012. His artistic journey began at the British School of Art and Design (BHSAD) in Moscow and continued at Concordia University, where Alexey discovered a passion for print media and ceramics in addition to his interest in drawing. He works in the expanded field of print media and his practice includes installation. On the level of materiality, he is interested in how innovations (such as digital manipulation and laser engraving) can elevate traditional printing techniques and how printing processes intersect with painting, drawing and ceramics. The subject matter that Alexey works with derives from his experience of living in several countries (Germany, Canada, Japan and Russia). Another important aspect of Alexey’s work is seeing the world from a perspective of a queer person. He works with such topics as memory distortion, personal identity change, migration. Alexey holds a bachelor's degree from Concordia University (2019). He has exhibited his works in Australia, Canada, Germany, Japan, Russia, United States and Spain. He has received several grants from the Canada Council for the Arts (CAC) and the Conseil des arts et des lettres du Québec (CALQ).