Recently the Icograda Board 2013-2015 completed its first Board Meeting in 2014 and this term. The meeting took pace in Montréal, Canada, which enabled the Board to meet our staff and familiarise themselves with different aspects of our Secretariat operations. 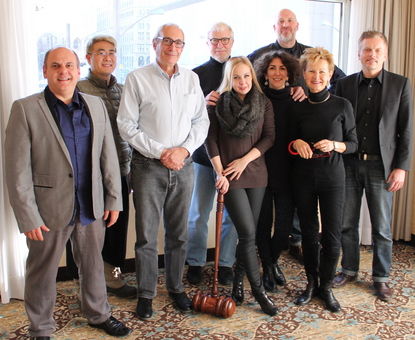 
Since election at the Icograda General Assembly, the Board worked diligently on orientation and development of a Roadmap for this term. As established at the General Assembly, the plans for this year include two special platform meetings for the Professional and Educational member categories (a special meeting for the Promotional category will be held early in 2015), enabling our members to provide feedback and become more actively involved in the Council’s agenda. Our Annual General Meeting will be held in alignment with Professional platform sessions in October 2014 in New York. The Secretariat will furnish you with ‘Save the Date’ information soon, and we strongly encourage you to take part in those events and actively collaborate in driving Icograda forward. In preparation for these meetings, you will also soon receive the Reports of the Special Sessions held in advance of the General Assembly last November, together with a Survey for each membership category. Please, take the time to complete the survey as your feedback will be critical in establishing the programme for the sessions.

Reflecting the implications of the official demise of the IDA, the Icograda Board approved the latest stages of negotiations with our Korean partners on the planned, reformatted 2015 International Design Congress and Icograda General Assembly in Gwangju, with our Canadian partners on the 2017 multi-congress Event, Icograda General Assembly and inaugural International Design Summit in Montreal and with Montréal International on the new multi-year host city agreement. The quick progress on all these agreements ensures continuity and stability. With the turbulence of recent months now behind us, the Board can now concentrate on implementing the important strategies adopted by the General Assembly.

During the Montreal Board meeting, the Board met with members of the newly established Audit Committee 2013-2015, Melanie MacDonald and Rebecca Blake (Rita Siow joined the meeting virtually) elected at the General Assembly to work out lines of communication for the coming term. The Audit committee had the opportunity to learn in more detail about the financial history over the past years and review the year-end financial results of 2013.

The Board was also very pleased to receive the final budget results for 2013. Despite the challenges faced over the past term, through very strict discipline, Icograda completed 2013 with a surplus. The budget for 2014 permits an expansion of the Secretariat that will permit an expansion of services to members. The three member-category platform events reflect this intent.

The Board also established the Former Presidents Committee 2013-2015. The committee, founded at the 2013 General Assembly, is an advisory committee to the Board and an invaluable resource. We are honoured that Former Presidents Jacques Lange, Russell Kennedy and Mervyn Kurlansky have agreed to serve on the 2013-2015 committee.

We are pleased to inform our Members that Jovana Milovic, Icograda’s Project Manager, has been promoted to the position of Managing Director. Jovana’s dedication and expertise during the past year has been invaluable to the Council and we are excited to work with her as head of the Secretariat.