On 01 July 2021, Japan Graphic Designers Association Inc. (JAGDA), changed its name to Japan Graphic Design Association Inc. The name change aims to expand JAGDA’s focus from representing graphic designers to include support for a range of design fields and interdependent industries. While the acronym JAGDA remains the same, the association is ‘calling in’ a wider range of practitioners to support the multidisciplinary graphic design sector in Japan. 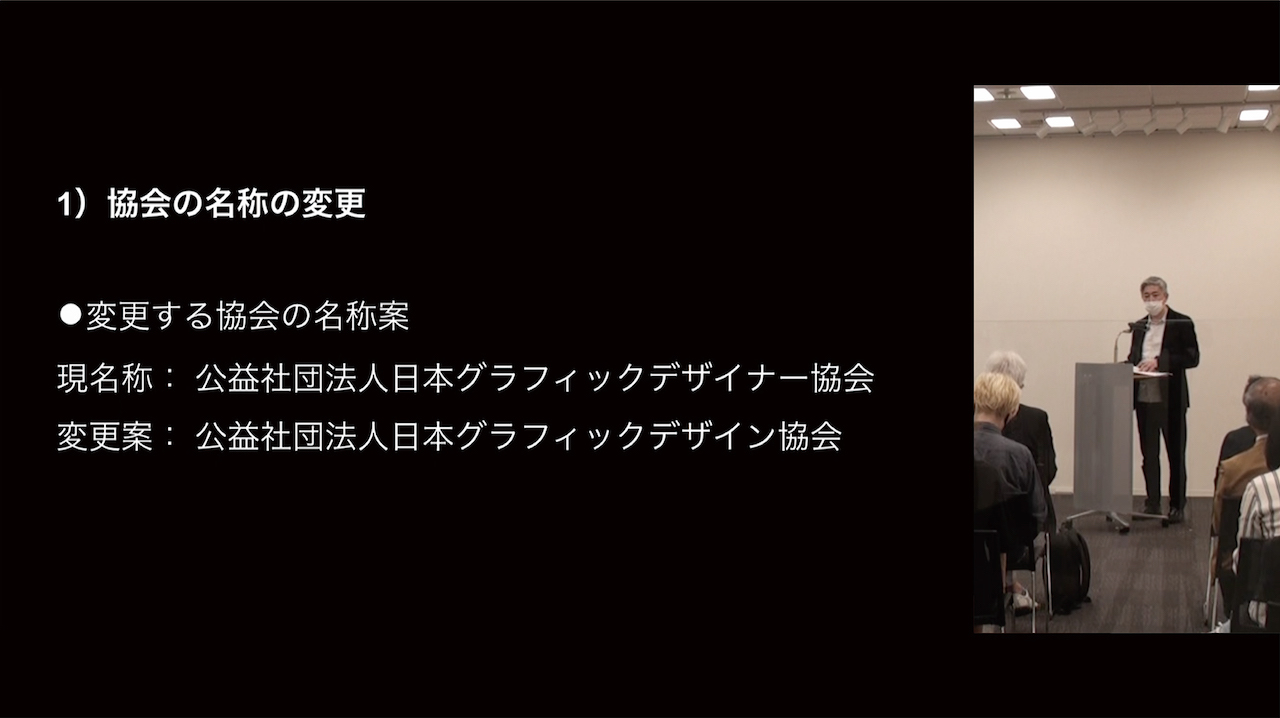 The name change was approved by General Assembly in June 2021. The GA was held in Tokyo with limited delegates on site, and live-streamed to members. Photo: A screenshot of the live-streaming of the agenda shows the old and new names presented by Kazufumi Nagai, Vice President.

Since its founding in 1978, JAGDA has been a unique national body generating and promoting graphic design. JAGDA currently has a member count of around 3,000. Its activities range from an almanac publication, exhibitions and seminars, regional development, public design creation to copyright protection. The organisation has represented a vast membership of esteemed graphic designers over the decades, and it is the only nationwide organisation centered on print media. JAGDA initiated the JAGDA Peace Poster Exhibition as a way of promoting peace, the environment, World Heritage and the impact of graphic design—a belief in the poster that Hiroshima Appeals Posters continues to maintain. Community-based projects like the Tokyo Midtown Design Hub, member-based exhibitions and JAGDA’s regional development seminars and lectures to update professional designers on creative process, copyright issues, social causes, etc. are part of the organisation’s long design history to act as a connector in the design community and engage with global themes. The Council holds a special debt to the Member organisation whose members, Icograda's 'Founder Friends' supported the Council in a time of transition.

A REFLECTION AND CHANGE

As an ICoD Member since 1981, we want to congratulate JAGDA for their reflections and their responsiveness to changes that are relevant not only to Japan but to the broader design environment as the social role of design becomes a pressing issue globally.  The organisation explained their decision in a Press Release:

Over time, with the emergence of digital media and the blurring of boundaries between different design domains, graphic designers also began to work in fields other than traditional print media. As a result of such changes in media and expansion of design fields, in recent years, there has been a notable increase in the number of people who are involved in graphic design but do not have the job title of “graphic designer.”

The process to reach this conclusion through internal consultation included a roundtable discussion between Taku Satoh (JAGDA President) Kenya Hara (JAGDA Vice-president) Kazufumi Nagai (JAGDA Vice-president). A reflection not only on the organisation but also a more general assessment of the changes confronting designers and industry both as a result of the pandemic and social changes that have been evolving over decades; the roundtable's conclusion are summarised in a document that is available on the JAGDA website.

(...)when it comes to knowing  what design is all about, there is still a complete lack of understanding. Some design – advertising, for example – is aimed at attracting notice, while other design is meant to perform an inherent function when needed but normally blends inconspicuously into the fabric of everyday life. The latter type of design is generally not thought of as design – and herein lies a profound problem. What JAGDA needs to do is to indicate to the world, in clearly recognizable ways, how design functions within society, and what will be possible and be guaranteed when the services of a professional designer are engaged. (from Roundtable Discussion Summary)

One important facet of this reflection was the acknowledgement that the internet — with its mix of technology, graphic design and UI/ UX design — has become not only a ubiquitous and essential tool but also a contributor to the isolation experienced in much of the modern world. With the emergence of digital media and the reality that graphic designers must work across disciplines incorporating new media, the name change acknowledges the inter-connectedness of the professional contributors to this medium.

The changes are announced in the context of JAGDA's vision statement: to Revolutionize the communication environment through the power of graphic design. The organisation ascribes an action list to this objective including Actions such as: Look to the future and continually question the possibilities of graphic design.

JAGDA’s observations are not that different to what other associations and designers are experiencing in other countries. The design sector finds itself in a cross-sectional role. This thought process reflects a larger global trend among design organisations who are adapting their strategies to unite their membership in a more global conversation. Citing a controversy several years ago over the creation of the Tokyo Olympics logo in which ICoD stood against speculative crowd-sourced competitions for the Olympic logo in order to “uphold the value the professional design and fair compensation for design work” (part of ICoD position on unpaid work), JADGA continues to be conscious of the need in Japan and worldwide, to communicate widely what design professionalism means, and how design impacts society especially now as the world faces the complex issues that require designers to think locally and -for-the-planet, to address the inter-connectedness of the environment, energy, international conflict, and today, the pandemic.

We observe similar reflection if not the same conclusions in other regions. In a similar response to a need for a more inclusive design representation, The Lithuanian Design Association for instance, chose to adopt a multi-disciplinary strategy within the design profession instead. Formerly the Lithuanian Graphic Design Association, an independent creative union uniting professional designers the organisation opened up to other design disciplines, becoming the Lithuanian Design Association (LDA) on April 27 2020. Always attempting to keep up with both the local and global context of design in Lithuania, LDA's "journey of change" was process of identity (re)creation, the association stated that identity shift was about “[c]hanges that have been going on for many years and are not going to stop. We see how identity systems change logos in the design market, how responsibility towards people and society changes self-realisation in decisions. We see how design disciplines are expanding and intertwining—next to graphic and industrial, experience, interfaces, service design are emerging.” (LDA, 2020)

As new fields emerge and cross-pollination becomes commonplace, many designers are integrating a range of design practices into their everyday work, and not all designers feel properly represented by the traditional disciplinary designations. For JADGA, retaining the “graphic” design signature shows JAGDA’s commitment to a longstanding history of graphic design culture that now wants to “call more in” to reflect what’s really going on, who is working with whom, and how. Embracing other design disciplines to become multidisciplinary also means adjoining design disciplines and up and down the value chain to include suppliers and other industry players. Recognising how design embeds humans and all species in the world in particular ways is part of the evolving design profession. 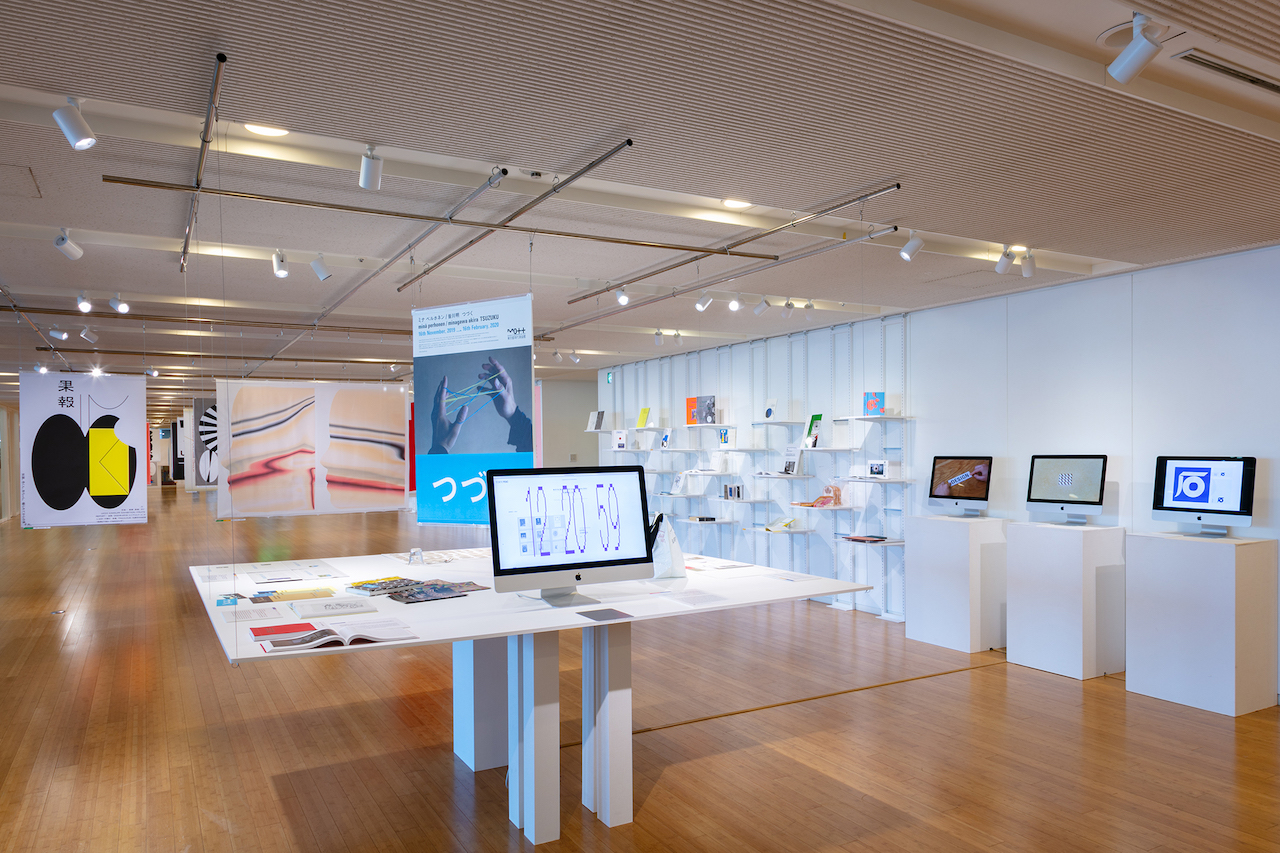 Member-based exhibitions: JAGDA has been introducing outstanding designs in its annual Graphic Design in Japan since 1981. Every year some 600 designs are selected from works submitted by its members through strict selection processes. The publication is followed by an exhibition showcasing some 300 pieces from the book, ranging from general merchandise, books, packaging, symbols and logos, posters, websites and moving images, to spatial designs for exhibitions and shops. In 2021, Yusaku Kamekura Design Award, the best of the year, was given to a web designer for the first time for this Award (exhibited on a monitor in front). Photo: The 2021 exhibition at Tokyo Midtown Design Hub. The exhibition pictured will be brought to Hong Kong in 2022.

Member-based exhibitions on social issues: From 2018 to 2021, JAGDA has been supporting both artists and athletes with disabilities by designing masking tapes, tumblers, and handkerchiefs featuring artworks by disabled artists. These designs have been exhibited at various shops and galleries across Japan, with proceeds going to the Paralympians Association of Japan. Photo: Masking tape on sale at Loft, a leading household goods specialty store (this photo was taken in Osaka, but the designs were featured in major cities); Guided tour for Paralympians at Tumblers exhibition in Tokyo; One of the travelling exhibitions featuring handkerchiefs in Oita Prefectural Art Museum.

The Hiroshima Appeals is a poster campaign based on Hiroshima’s Spirit, a theme that transcends words and aims to convey the prayers and wishes of Hiroshima, the city and people who experienced the ravages of the first atomic bomb used on humankind. Since 1983, with the first poster Burning Butterflies by Yusaku Kamekura, JAGDA has designated one member designer to produce a poster each year until 1990, resuming in 2005 to commemorate the 60th anniversary of the end of World War II. The posters are presented to the mayor of Hiroshima City every year. The posters have been displayed in Europe since 2019 thanks to support from Design Austria. Photo: Takuya Onuki presenting 2021 edition to deputy mayor of Hiroshima City; Entrance of Vienna exhibition; Exhibition in Stadhagen, Germany (Photo: Anastasia Esau).

Design organisations are beholden to their members to evolve and reflect the changed working climate, social environment and evolving ethics of the profession. ICoD continues to support all efforts from their Member organisations to grow, change and respond to the changes in their regions and globally. We hope that one facet of this will be to continue to stress professionalism as a way of promoting the position of designers, in keeping with the ICoD Professional Code of Conduct for designers, which firmly positions design as a profession, focusing on ethical issues and the overarching responsibility of designers to humanity. Shifting identity and widening the arena of designers who come together to shape the future of professional design comes with its both challenges and opportunities. We look forward to seeing how the difficulties that design professionals faced during the pandemic play out not only in readjusting the meaning of design organisations, but in how they incite designers to redefine professionalism in their own regions.